YBMW Contest: Weird Wobbler of ‘Jill’ From ‘The Beyond’

Enter now for your chance to win a bobble head of Jill from ‘The Beyond’ – Complete with Detachable Shotgun Wound Face!

YBMW and Cult Collectibles are joining forces to offer one hell of a kickass giveaway! If you love zombie films and we know many of our readers do then you’ll need to have this in your collection. ‘The Beyond’ weird wobbler bobblehead features Jill the possessed little girl that gets half her face blown off by film badass David Warbeck. The figure also includes free CD soundtrack of Fabio Frizzi’s excellent score to the film. The bobble head is worth it just to own that CD but it helps that the collectible is pretty great.

Collectible details:
The world’s first bobblehead to include an alternate detachable face! No expense or detail has been spared during the nearly year long creation process of this incredible figure! ‘The Beyond’ will likely be the figure Cult Collectibles is eternally “famous” for. It’s like having two figures in one. You can choose between the “possessed” face or the “gun shot” head from the film’s most shocking scene! All of this is packed in a amazing full color box featuring a fold out cover representing the “Book of Eibon”. The detachable “possessed” face secures to head by magnets and rests nicely on the figure base when not attached for easy display and storage! 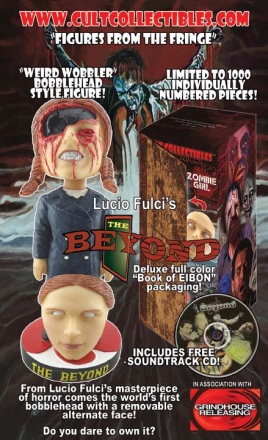 Lucio Fulchi’s ‘The Beyond’ is a true treat for horror fans and if you haven’t seen it then you fucking owe it to yourself to do so. It’s one of my all time favorite zombie films and Lucio gives you all the gore a fan could want.

TO WIN THIS GREAT COLLECTIBLE FOLLOW THE STEPS BELOW:

No purchase is necessary. The winner will be selected randomly from all valid and correct entries. ‘The Beyond’ Weird Wobbler giveaway ends October 31st, 2011