It was just announced a couple hours ago that the graphic novel, ‘Joe Golem And The Drowning City’ created by Hellboy Creator Mike Mignola and Christopher Golden is on its way to the big screen. The film will be a collaboration between Mignola and Alex Proyas and is set to shoot in Australia.

Here is how Deadline describes the story:

The title is a supernatural-steampunk illustrated novel that follows an orphaned teenage girl, an aging magician, a lunatic scientist, a Victorian occult detective, and the stalwart sidekick, Joe Golem—a man whose strange dreams hint of a history he has forgotten–as they struggle for the fate of an alternate 1970s lower Manhattan. In this vision, lower Manhattan sank into the water during a catastrophic earthquake in 1925, leaving those unwilling or unable to abandon it to make a new life in streets turned to canals. 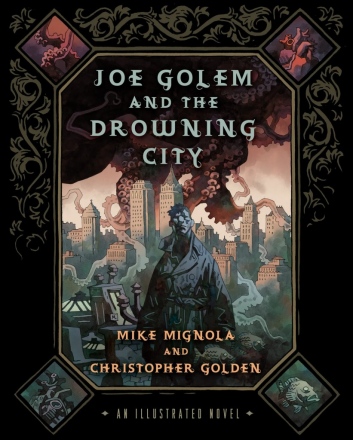