It’s nice to see that Sasha has recovered so nicely.

Shortly after Sonequa Martin-Green made her memorable exit from The Walking Dead, the actress made a b-line for Toronto, where filming was beginning on CBS’s ‘Star Trek: Discovery.’ Today, we are getting our first look at Marin-Green and her cast mate, Michelle Yeoh in the first official look at anything other than the ship from the new series. While the pic doesn’t give us a look at the new Star trek uniforms, you can bet that they will probably be revealed early enough for fans to cobble together some suitable cosplay for Comic-Con.

the big concern for this show is where it has been placed. CBS has decided that it would be best suited to their fledgling, online subscription service instead of giving it a home on a tradition network or an existing service. That means fans will have to pay an additional $5.99 – $9.99 (depending on whether or not they are willing to put up with ads) for the privilege of having official access to the show. In reality, there’s a pretty solid chance that Star Trek: Discovery may just go down as the single most pirated show in TV history. 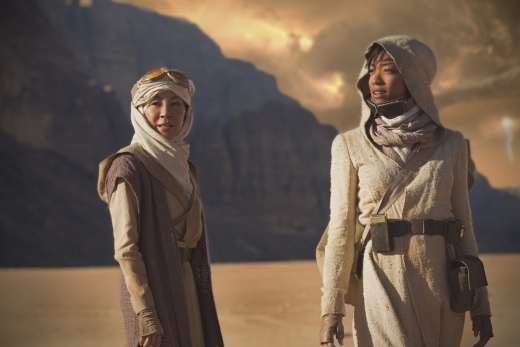