Johanna Mason is a District 7 winner who is known for pretending to be weak as a means of tricking of other tributes into underestimating her.

The Hunger Games: Catching Fire opens in theaters November 22 and this week, the studio has begun the process of releasing all of the posters for the “Quarter Quell”, the new version of The Hunger Games that pits all the surviving winners against each other.

One of the biggest casting announcements for the sequel was the addition of Jena Malone as Johanna Mason, a District 7 winner who is known for pretending to be weak as a means of tricking of other tributes into underestimating her.

Today, they’ve just released her poster, which is also are first peek at Malone in character. 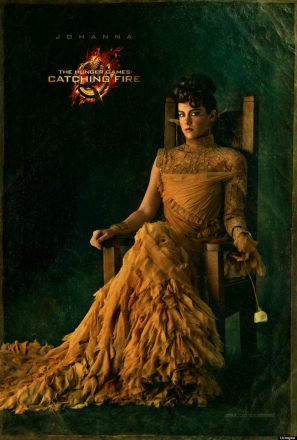 Official Synopsis:
The Hunger Games: Catching Fire begins as Katniss Everdeen has returned home safe after winning the 74th Annual Hunger Games along with fellow tribute Peeta Mellark. Winning means that they must turn around and leave their family and close friends, embarking on a “Victor’s Tour’ of the districts. Along the way Katniss senses that a rebellion is simmering, but the Capitol is still very much in control as President Snow prepares the 75th Annual Hunger Games (The Quarter Quell) – a competition that could change Panem forever.