I don’t think this needed an apology as much as a press release from GW saying how proud he is to be on one of TV’s coolest shows.

I don’t think this needed an apology as much as a press release from GW saying how proud he is to be on one of TV’s coolest shows. Lawyers and people with poles up their butt who take every little thing as a major personal insult however do not see things the same way. That’s why, after a minor gaff on the set of Game of Thrones that resulted in George W Bush’s head on a pike, apologies are being made and lawyers are finding a way to earn some billable hours.

The whole thing sounds like something made of nothing. Game of Thrones rents a lot of props, including large quantities of fake human heads. It wasn’t noticed during filming (and who really cares if it was), but it did get noticed when the show creators were re-watching series one in preparation for the commentary tracks on the DVD. Had they not pointed it out, no one would have ever probably noticed. They did point it out. So… here are the apologies. 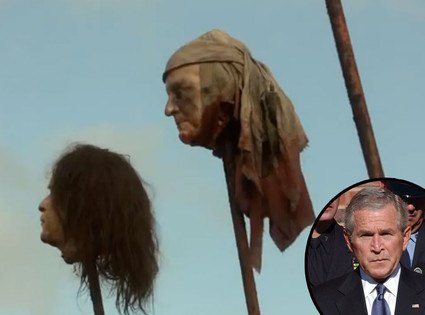 We were deeply dismayed to see this and find it unacceptable, disrespectful and in very bad taste. We made this clear to the executive producers of the series who apologized immediately for this inadvertent careless mistake. We are sorry this happened and will have it removed from any future DVD production.

We use a lot of prosthetic body parts on the show: heads, arms, etc. We can’t afford to have these all made from scratch, especially in scenes where we need a lot of them, so we rent them in bulk. After the scene was already shot, someone pointed out that one of the heads looked like George W. Bush.

In the DVD commentary, we mentioned this, though we should not have. We meant no disrespect to the former President and apologize if anything we said or did suggested otherwise.