Lucius Fox is one of the most important, if not understated characters in the the Batman film universe. Without him there’d be no cool toys for Batman to kick people’s asses with. Not to mention the fact that his role is played by God (Morgan Freeman).

Now, we finally get to see a trailer for The Dark Knight Rises that gives Fox his due. In the new trailer, we almost exclusively see him and Bruce Wayne looking over some new equipment while Wayne insists that he’s retired from the bat game. 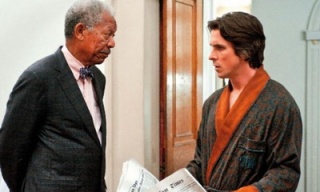