Along with watching Cap break Tony Stark’s heart in the trailer for ‘Captain America: Civil War’ one of the best moments was the reveal of The Black Panther. Now we have new details on his role in the film.

Along with watching Cap break Tony Stark’s heart in the trailer for ‘Captain America: Civil War’ one of the best moments was the reveal of The Black Panther. Now we have new details on his role in the film.

Before we dive into the new details on the cover, who thought it was a cute idea to put “Meow” Next to his head on the magazine cover? 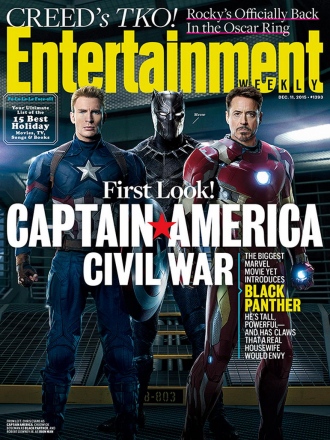 Anyways. Thanks to the coverage, we now know that Panther is not a big fan of Bucky, but that doesn’t mean he’s not going to fight along side Cap and his team of fugitives. The truth is, we don’t really know. As it says in the article:

“He’s definitely not the life of the party in this instance. I think this is something true of the comic book character and the movie. You never quite know where he stands. There’s always a bit of concealing and mystery. So I think mysterious is more his boat. Not to say there’s not charm and he can’t be a ladies’ man and all that. It’s more like if there is humor, it’s more like James Bond.”

Bosemen, the actor playing the leather-clad Wakandan spoke to his character’s struggle to balance the traditions he’s been taught with modern society.

“There definitely is a sort of tradition that he’s torn between, in terms of how things were done in the past and how things need to happen now in this new world. I think there’s perhaps a bit of a maverick there, and then there’s also a need to live up to traditions and his father’s legacy. And not even his father’s legacy, but the entire nation of Wakanda. I think those are the things you will see.”

He went on to speak about his scenes with Chris Evans as Captain America:

“I love our scenes together because I do think they feel a sense of responsibility. I think they’re both very selfless people. They want the right thing, no one’s irrational, no one has an inflated ego.” (That’s got to be a dig at Iron Man, by the way.) “They’re family-first people,” Evans says. “I think outside of the suits we’d be friends, Steve and T’Challa.”

Finally, he revealed that the Black Panther costume is made of the same stuff as Cap’s Shield, Vibranium.