Check out the first images and the new line-up of DC’s Suicide Squad before they hit the small screen.

Arrow continues to surprise fans both for how good it consistently remains and the unique ways that they’ve woven in other characters from the DC universe. They’ had the ability to bring in a wide assortment of both heroes and villains without losing the realism that sets Arrow apart from other super hero shows.

Coming up, they’ll be bringing in one of the hottest teams in DC comics into the show, Suicide Squad. While I’m really excited to see how they fit into the show, I’m still a little bummed that we won’t be seeing Harley Quinn. 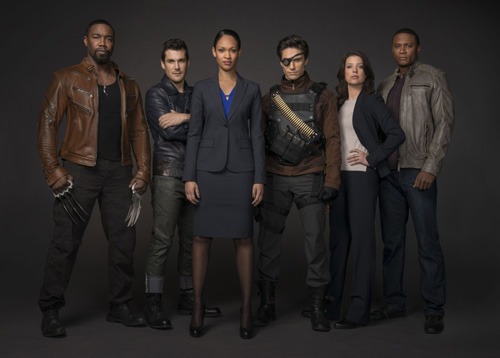 Here’s the official synopsis for the episode:
AMANDA WALLER SENDS THE SUICIDE SQUAD OUT ON THEIR FIRST MISSION — Following Slade’s (Manu Bennett) return and his promise to make good on his threat to destroy Oliver’s (Stephen Amell) loved ones, Oliver focuses all his energy on preparing for battle with his former friend. Sarah (Caity Lotz) tries to help but, fearing for her safety, Oliver pushes her away. Meanwhile, Diggle (David Ramsey) is recruited by Amanda Waller (guest star Cynthia Addai-Robinson) and A.R.G.U.S. to stop a warlord (guest star Lee Majdoub) he knew from his time in Afghanistan. Always the solider, Diggle agrees to help. However, he’s not prepared when Amanda introduces him to the rest of the team – Deadshot (guest star Michael Rowe), Bronze Tiger (guest star Michael Jai White) and Shrapnel (guest star Sean Maher), all criminals he and Arrow helped put away. Lyla (guest star Audrey Marie Anderson) defends the team and explains the world is a complicated place, but Diggle isn’t sure he agrees. When the mission takes a dangerous turn, Diggle is forced to make a difficult decision. Larry Teng directed the episode written by Keto Shimizu & Bryan Q. Miller (#216)