I’d buy that for a dollar!

I’m really starting to love Jose Padhilla’s Robocop reboot. He’s got a stellar cast together. Joel Kinnaman is playing Murphy. Hugh Laurie is the head of OCP, and Gary Oldman, Sam Jackson and Abbie Cornish are also in the film. I’d go see it just to watch that cast.

Anyways, they’ve just launched a new viral site that includes the video that we’ve posted below. Not only does it feature ED-209, but it also teases the upcoming news on the release of the RC-2000 (Robocop!).

Right now, all you can do on the Omnicorp Site is watch the video. Everything else gives you an “Access denied”. I’m actually surprised that there isn’t even a place to sign up for updates. We’ll keep track of it for you and let you know what other goodies they unlock.

I’m guessing that we’ll have a synopsis for the new film sometime this week, but here’s the synopsis from the original film to tide you over:

Set in Detroit sometime in the near future, the film is about a policeman killed in the line of duty whom the department decides to resurrect as a half-human, half-robot supercop. The RoboCop is indestructible, and within a matter of weeks he has removed crime from the streets of Detroit. However, his human side is tortured by his past, and he wants revenge on the thugs who killed him. 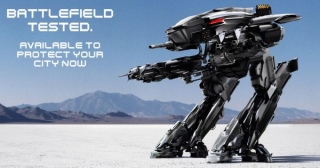