It’s about time that he stopped making comic books into films and just made a book himself!

It’s about time that he stopped making comic books into films and just made a book himself! Seriously. Zak Penn has had his hands in more scripts than almost anyone else in the super hero genre. Along with scripting X-Men: The Last Stand, The Incredible Hulk and Electra, he’s also got a story credit on ‘The Avengers’. Also, let’s not forget that he is the co-creator of the new Syfy hero show: “Alphas.”

Now it looks like he’ll finally be making his first venture into ink. His new series, “Hero Worship” is going to be a six-issue series from Avatar Press and is scheduled to launch in July.

THE story focuses on a hero named Zenith “who has legions of fans following every disaster, trying to catch a glimpse of the ultimate celebrity and risking their own lives in the process. One of his fans becomes so obsessed it leads to the development of his own powers.

I’m a big fan at books that take a different look at the superhero angle. That is what drew me to Marvel’s “Marvels” when I was a kid and to “The Boys”… at least for a while. 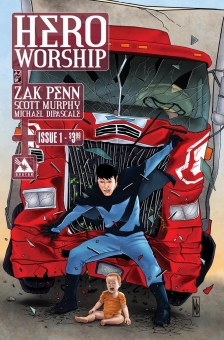