While not a brand new toy, The ultimate Omnitrix is pretty popular for boys right now because Ben 10 is one of the hotter cartoons and the new live action TV special just gave kids one of their first looks at what it would be like to have a real Omnitrix. What is an omnitrix? Think of it as a wristwatch that turns you into different aliens. Now this one won’t turn your kid into a monster… like he really needs help doing that anyways. This toy is really more roleplay than anything. When you slap on the little clear figure that comes with it, it lights up and tells you the name of the alien, just like in the cartoon. Now, if you kid has any Ben 10 toys and you don’t know what to do with those little clear figures that come with each toy, you need this. All of those work on here. The toy even recognizes each one of them which means your kid will probably actually play with this thing for a long time. 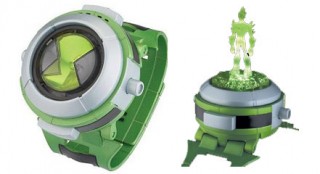 Get yours today at amazon.com

The Ben 10 Alien Creation Chamber is a really cool addition to your kid’s Ben 10 collection, but if he is the kind of boy that loses little pieces, you might want to hold off. The toy allows you to take all these body parts from different figures and place them around the inside of the creation chamber. Next, just flip the switch and it combines pieces to make a whole new alien. It is pretty cool and there’s a lot of combinations that help increase play longevity. All in all it is a cool toy. The bottom storage comaprtment can even help avoid losing pieces, but if your kid really loses everything, then this might be a buyer’s beware.

Get yours today at amazon.com.

The Transformers Bumblebee Plasma Cannon is pretty self explanatory and a whole lot of fun. Who would have thought that all it took were 3 AAA batteries (included) to power a plasma cannon capable of blasting “Decepticons into submission.” Okay, so maybe it doesn’t actually fire red hot plasma. But what it does do is produce a variety of sound effects and lighting up depending on what mode you’re in. For example when in plasma gun mode, it lights up and produces your “pew pew” sound effects with recoil action. In robot fist mode, it switches to punching/smashing sound effects. During the transformation between gun and fist mode, it also produces the iconic transformation sound effect which really adds to the effect and is a nice touch. As an additional bonus there are sound effects of Bumblebee in car mode which you can active by pressing the small Autobot logo on the bottom the plasma cannon! The Bumblebee Plasma Cannon is extremely imaginative and can be purchases as a stand alone or with the Bumblebee Voice Mixer helmet to recreate and complete the ultimate movie experience.

Get yours today at hasbrotoyshop.com