In recent years, Hallmark has really stepped up their Keepsake ornament line to put a heavy influence on pop culture. Last year, they took things to the next level with the creation of their “PopMinded” line which saw the release of three amazing Star Wars ornaments, along with a ton of Itty Bittys. With this year being the 50th anniversary of both 2001: A Space Odyssey and Planet of the Apes with new releases inspired by the films, they are rolling out ornaments and Itty Bittys for both of them.

You can now order the “itty bittys® 2001: A Space Odyssey™ Dave Stuffed Animal Limited Edition and itty bittys® Planet of the Apes™ Dr. Zaius & Dr. Cornelius Stuffed Animals, Set of 2 on Hallmark’s Site. Meanwhile, their HAL ornament, which should include lights and sounds from the film, is set for release in October. 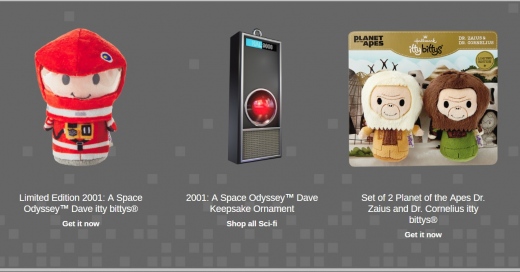