In a time so long ago begins our play. In a star-crossed galaxy far, far away. 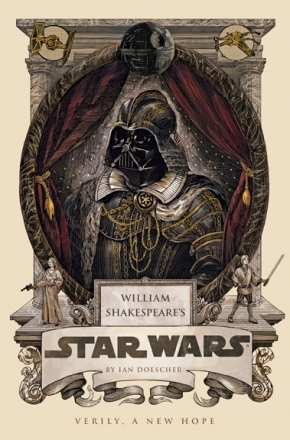 It is a period of civil war

The spaceships of the rebels, striking swift

From base unseen, have gain’d a vict’ry o’er

In a time so long ago begins our play

In a star-crossed galaxy far, far away.

That is the beginning of Ian Doescher’s magnificent book William Shakespeare’s Star Wars: Verily, a New Hope (WSSW). WSSW is a fresh new retelling of a story over 30 years old. Doescher stays true to the bard by following iambic pentameter and using a more Elizabethan style of English. He also adds to the original Star Wars story by giving characters, such as R2-D2, thoughtful asides and monologues.

To be honest when I first read the title I felt a bit more trepidation than excitement. I am a massive Star Wars fan and own the movies in almost every medium possible. I have an extensive collection of books and comic books relating to Star Wars and the extended universe so I was excited to read this book. Shakespeare’s name brought some pause from me however. It brought to mind all those hours in high school English trudging through the thees and thous and endless hours analyzing. In fact the only play by Shakespeare that I truly enjoyed was Henry V. With that in mind I was a bit hesitant to start the book. I was hooked by the second page. Doescher is every bit a wordsmith as the Bard taking modern concepts and ideas and turning them into something that would not look out of place in the Globe theater. In addition to adopting Shakespeare’s style of writing, Doescher includes many references to the Bard and his work. In one scene Luke addressing a stormtrooper helmet “Alas, poor stormtrooper, I knew ye not”. Even those with just a passing acquaintance with Shakespeare’s works will recognize the reference to the famous Hamlet speech often misquoted as “Alas, poor Yorick! I knew him well”. While scenes such as these are not essential to the story they are a nice acknowledgement to the Bard.