I wonder if they could make a giant one to take on the great Pacific garbage island.

To the residents of Baltimore, they are known as Mr. Trash Wheel and Professor Trash Wheel, but the mechanical floating snail-like creatures are more than just mascots for the Inner Harbor. The hydro-powered trash interceptors scoot around the water, scooping up plastic bags, Styrofoam containers, cigarette butts, and other assorted crap. 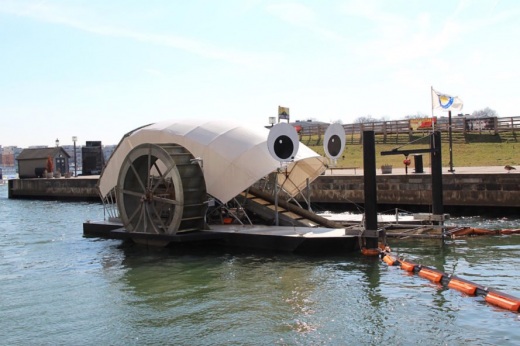 The initial trash wheel prototype was created by local sailor and engineer John Kellett, who approached the city about trying to find a water pollution solution after watching debris floating in the Inner Harbor on a regular basis. After a little trial and error and a promising but inadequate first trash wheel, Kellett gained the support of the Water Partnership of Baltimore, a non-profit that supports environmental legislation and aims to make the area a green, safe, and friendly destination for both humans and animals.

The are powered by solar panels that turn the water wheel, which in turn activates a conveyor belt. Floating containment booms gather up the trash that floats in its path and rotating forks feed the litter onto the conveyor belt and deposits it into a dumpster. It sounds simple, but it’s insanely effective. The two machines have been pulling in 50,000 pounds of harbor trash each day

Since the trash machines rolled out in 2014, they’ve picked up around 70-100 dumpsters worth every year. That means 300,000 plastic bags, six thousand glass bottles, and nine million cigarette butts are removed from Baltimore’s inner harbor. So far, the strangest thing that the trash monsters have ever pulled from the water is a live ball python.

I wonder if they could make a giant one to take on the great Pacific garbage island. 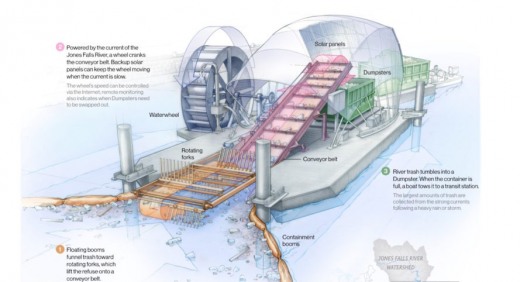