From Pac-Man to Beavers, get the full run down of everything Pennsylvania dropped to bring in the New Year.

If you’re like me, you probably watched the Ball drop on New Year’s Eve… you know, the big crystal thing that glided safely to land after Mariah Carey’s Career did the same at a much faster speed? Now, I’m not so ignorant that I think people can only drop balls at the stroke of Midnight. Here in Florida, they drop a giant Orange. Sure, it’s a little weird, but that’s nothing compared to the various things they do all around Pennsylvania. It turns out that several cities and towns around the state, each have their own traditions, and they are all really freaking odd.

Pac-Man
In the city of Hanover, residents bring in the new year by dropping a 3×3 foot of the video game icon. Why do they do it? No one really knows. The town has no connection to the game. Perhaps they do it to scare off ghosts.

The Future of Pittsburgh Ball
In Pittsburgh, they celebrate the New Year by dropping 1,000 lbs of recycled garbage. They’ve been doing it since 2007, and it’s supposed to show of Pittsburgh as a Green City…

Cast-iron kettle
In McClure, There’s an annual bean soup festival. You know, because farting is fun! To celebrate it, they drop a kettle.

Beaver
What else would they drop in a town called Beavertown? It just so happens that they drop Bucky the beaver from 75 feet using a firetruck ladder. 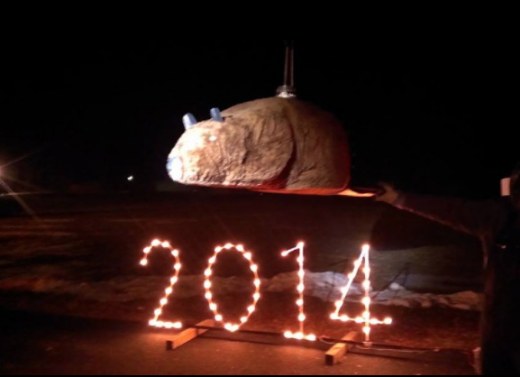 A Red Rose and a White Rose

In Lancaster they drop a Red Rose and in York, they drop a White Rose. They do it in memory of the Wars of the Roses. If you’re a history buff, you might have already realized that neither Lancaster nor York actually fought, but their schools are rivals, so I guess it still works.

Another “on the nose” New Years drop takes place in Mechanicsburg, where they picked everyone’s favorite tool, a wrench.

A Sled
Move over Rosebud, Duncannon has their own sled that they love to drop on New Year’s eve. This particular sled is a replica of the Lightning Guider, which was once manufactured by the local Standard Sled Factory.

Strawberry
I don’t know about you, but when I think about Harrisburg, PA, I think about Strawberries. OK, maybe not, but the city does have Strawberry Square, and that’s why a juicy red fruit drops from their sky on December 31st.

A Pickle
It’s Dillsburg, so what were you expecting?

Bologna
While most people drop a replica of something on NYE, in the town of Lebanon, they drop actual meat. For years, they would drop a 200 lb bologna down to the city, but in they’ve now swapped it out for 20 10-pound blocks that can easily be donated to school programs.

Hershey’s kiss
In the city of Hershey, would you expect anything else?

Peep
If you were expecting them to drop a baby Jesus in Bethlehem, you’ll be sadly disappointed. However, Bethlehem, PA is also the birthplace of Peeps. So, with that in mind, here’s a giant marshmallow chicken.

You may not know this, but Mushrooms are actually a pretty big crop in Pennsylvania. To celebrate the fungus and its economic impact on the state, Kennett Square drops one that’s made out of stainless steel and weighs 700 pounds.