If you’ve paid any attention to the 2016 election than you are probably feeling the same thing as me. Clearly, aliens are taking over and this is just the first wave. That might be what John Carpenter was feeling when he directed his cult classic, They Live. The film, which starred Rowdy Roddy Piper, tells the tale of a man who “discovers the ruling class within the elite are in fact aliens managing human social affairs through the use of subliminal messages in mass media and concealing their appearances through the use of a signal on top of a major TV broadcast station.”

Artist, Russ Lukich is creating a series of limited edition Halloween masks that feature each of the main candidates as the aliens from the film. His first limited edition mask is none other than The Donald himself, Donald Trump. 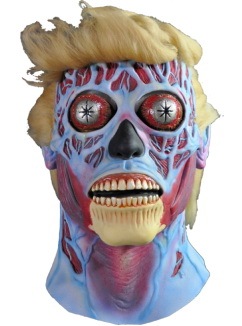 You can pick up one of the limited edition masks here

If you are unfamiliar with the original film, check out the trailer below: