Barry Bonds, This Time Probably Pissing Off the PETA

When Bonds isn’t caught up in the BALCO steroids scandal, one has to wonder what he’s been doing with all his free time. 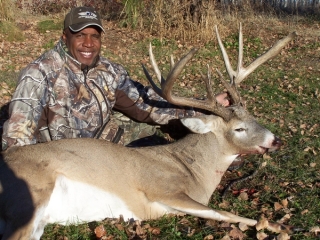 When current homerun king and former San Francisco Giants, Barry Bonds, isn’t caught up in the BALCO steroids scandal, or sitting out the entire 2008 MLB season, one has to wonder what he’s been doing with all his free time.

Since his (obvious) blacklisted from baseball, Bonds has been deer hunting with former teammate Ryan Klesko, and acting as a spokesman for Christensen Arms, a company which produces hunting rifles.

In a letter addressed to Christensen Arms, Bonds writes:

“I just got back from Canada with John Mogle and I can’t tell you how pleased I am with my Christensen Arms 300 Ultra Mag. I had taken it out previously on a hunt and couldn’t believe how light it was. But what’s really impressed me the most is…

…for a 300 Ultra Mag there is so little recoil. With this super wide whitetail closing in, the only thing I had to worry about was putting the crosshairs on the front shoulder, and the rifle would do the rest. One blast is all it took and I left Canada with an amazing whitetail that scored 193″.

I just wanted to tell everyone at Christensen Arms thanks for building such a tremendous rifle.

Keep up the great work and God bless,

Bonds can be seen in the info-video below with John Mogle, hunting down a whitetail deer in Canada, as well as various web photos with him posing and smiling next to his kill.