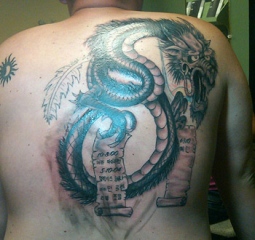 Jon Gosselin is “born again” and not being satisfied with just wearing Ed Hardy shirts, he is now a walking Ed Hardy shirt. The former reality star recently got him a new full back Korean dragon tattoo that is said to represent his maternal heritage.

RadarOnline, which first reported the news, says the tattoo took 14 hours to complete, which Jon broke up into two sessions two weeks apart.

“I wanted something that resembled a rebirth or a change in me,” Jon said of the new ink.

The new dragon depicts a black-and-gray dragon clutching a scroll in each claw listing the names and birthdates of his eight children: twins Cara and Madelyn (aka Maddy) and the sextuplets, Alexis, Hannah, Aaden, Collin, Leah, and Joel.

There is also a mysterious ninth name listed on the scroll which according to Korean translators spell out “Erin.” Representing Jon’s most recent girlfriend, 23-year-old Ellen Ross.

Gosselin claims his new tattoo was not a spur-of-the-moment decision.

“I have planned this tattoo for years now,” he tells Radar.

The dragon design, containing zodiac elements to represent the circle of life, is the latest chapter in Jon’s recent rebirth story. He has hired a new manager and recently began working with a life coach to help him improve his way of living. The TLC star, who recently went through a very public divorce, expressed the desire to work on himself and become a better father.