In a recent interview with Vanity Fair, the former “Spider-Man” star Kirsten Dunst admitted that she is ready to bare more skin on the big screen. 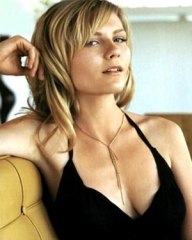 What do you do when your career is on the decline? You bare more skin. In a recent interview with Vanity Fair, the former “Spider-Man” star Kirsten Dunst admitted that she is ready to bare more skin on the big screen.

“I was comfortable with it and it just felt more vulnerable, you know? There’s actually a very good reason for it,” she says of her first experience with on-screen nudity in her new film “All Good Things” with Ryan Gosling.

In the interview, Dunst explains the motivation for her character and a shower scene in which she bears it all.

“What happens is, I come into the shower with Ryan, and for my character, it’s a smart ploy. She just found out that she got accepted to a medical college, and he’s afraid he’s losing her.”

“He’s threatened by everything that’s happening to her and he just had this weird moment when he jumps into the water and gets their boat and writes their telephone number on it.”

“What happened in the shower scene, she comes in and we start making out, and I gesture that I’m going to go down on him. And then I do.”

“But the scene did get cut out,” she reveals. “Not that we showed everything, but you saw what I was doing to him. I thought it really made sense. In her own way, she’s being as manipulative as he is. She’s trying to get what she wants. They both are.”

“That’s what the scene was about for me. It’s her gesture of coming into the shower and making him feel good, and in doing so, trying to get what she wanted. So I thought it was appropriate.”

“After this, I also have a nude scene in “Melancholia.” So they (audiences) will get used to seeing me naked.”

“Melancholia,” is a sci-fi disaster film set for release in May 2011, Dunst will co-star with Kiefer Sutherland and Charlotte Gainsbourg.