Lose and Gain Faith In Humanity With This Selfie Statue Story

It will be interesting to see how long the statue stays up before it’s either A. Stolen, B. Vandalized, or C. the butt of major internet style photoshop Magic.

There’s two parts to this tale. First, we’ve got the part that will make you lose faith in humanity. Thankfully, we’ll have a second chapter below that will help restore it… at least a little bit.

First, let’s talk about the bad. The city of Sugar Land Texas decided that a statue of two girls taking a selfie was not only art, but was so great that it deserved a spot just outside city hall. That’s the whole first half of the story. Stupid people bought a stupid statue. 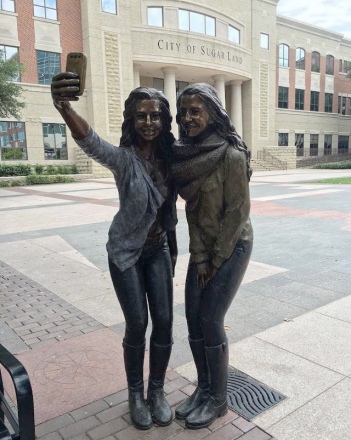 Now, let’s talk about the second half of the story. The residents of Sugar Land are losing their ever loving minds over the eye sore. Part of the anger comes from the fact that they think it was paid for with tax payer’s dollars. That isn’t actually true. Someone donated it to the city. The other half, that it’s an embarrassment and just plain stupid, is pretty spot on.

“I’m salty [expletive] about that ‘selfie’ statue in Sugar Land,” one man tweeted. “Who approved that s—?”

“I’m embarrassed for everyone,” a woman commented on Twitter.

In fact, the selfie statue was part of a 10-piece sculpture collection paid for by a generous resident, according to a press release put out last month by the city, saying that the sculptures were “donated by a Sugar Land resident to the city through the Sugar Land Legacy Foundation.” The donor was identified as Samuel Levin. He could not immediately be reached by ABC News for comment.

It will be interesting to see how long the statue stays up before it’s either A. Stolen, B. Vandalized, or C. the butt of major internet style photoshop Magic.