Robin From ’60s TV ‘Batman’ Series A Superhero For Dogs 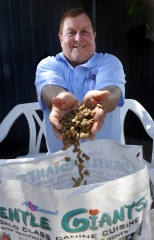 The former actor who played Robin in the 1960s TV series “Batman,” has long since given up his tights and is now a co-creator of the large breed dog organization Gentle Giants Rescue and Adoptions. Together with his wife, Tracy, who helps him run the rescue, they have started to produce Gentle Giants dog food, a high-end dog food line that he says nearly doubles the lives of the animals he shelters.

“We measure the success of our business in terms of life,” Ward said as he sat near the pool of his home in Norco, which doubles as the nonprofit’s location.

The average life span of a large-breed dog is about seven years, Ward said. Until recently, Ward cared for a 21-year-old Great Dane, and still has 18-, 16-, and 14-year-old dogs running around his property with canines half their age.

The food can only be found in grocery stores, such as Ralphs, in California. Ward decided to bypass all the boutique and chain pet stores, he said, to make the product more affordable and accessible.