‘Twilight’ Actress Christian Serratos Takes It All Off For PETA

At 19, Serratos is the youngest person to pose naked in a PETA ad.

“Twilight” actress Christian Serratos has taken it all off in support for the animal rights group PETA.

Serratos appears in the misty forest leaning against a tree buck naked. At 19, Serratos is the youngest person to pose naked in a PETA ad exclaiming the now famous PETA slogan “I’d rather go naked than wear fur.”

PETA’s anti-fur ad campaigns have been graced by other celebrities like Eva Mendes, Karina Smirnoff, Roselyn Sanchez and Charlize Theron. 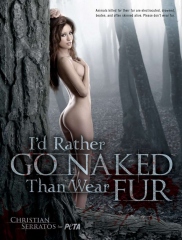