Enter now for your chance to win a 3-Disc DVD set of SyFy’s “Ghost Hunters International” Season One! 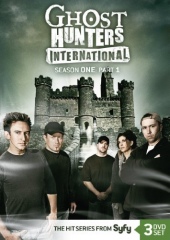 We are giving away a copy of SyFy’s new 3-Disc DVD set of “Ghost Hunters International” Season One. The fully loaded 3-disc set is a spin-off of the original with a different team of paranormal investigators – Robb Demarest, Dustin Pari, Brandy Green, and Barry FitzGerald – who use scientific techniques to explore the world’s most famous supernatural locations. From England’s most haunted castles to a cursed Scottish orphanage and even Germany’s legendary Frankenstein Castle, you’ll accompany the team on a nerve-jangling exploration of the eeriest spots around the globe.

This fantastic series features 11 44-minute episodes that will take you to several haunted locations from Chillingham Castle, a haunted village, to even Frankenstein’s Castle! If that’s not enough the 3-Disc set also features over an hour’s worth of deleted/extended scenes!

ABOUT GHOST HUNTERS INTERNATIONAL:
A spin-off of the Ghost Hunters series, Ghost Hunters International features a squad of paranormal investigators who use their principles of scientific techniques, to explore some of the most legendary haunted spots around the world. Each week the team travels to the far corners of the globe, searching for answers to bizarre supernatural mysteries.

For its first round of investigations, the International crew took on some of Europe’s most haunted locales, including Chillingham Castle in England and the forgotten underground city of Mary King’s Close in Scotland. The new episodes will take the team to countries such as Peru, Singapore, Sweden, the Philippines and many others.

To enter all you have to do is fill out the form below with the correct answer to this month’s contest question:

No purchase is necessary. Winners will be selected randomly from all valid and correct entries. The Ghost Hunter International Season One DVD giveaway ends July 11, 2010.

This Month’s Question: What does the acronym T.A.P.S. stand for?