If aliens do exist, sending them this movie is probably the stupidest thing we could ever do. 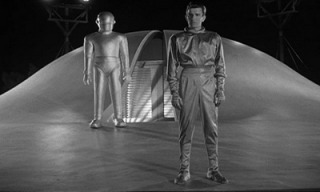 Let me just start out by letting you read the new release about the stupid decision from 20th Century Fox to release The Day The Earth Stood Still into the depths of outer space. At the bottom, I’ll tell you just how stupid an idea I think this is.

Twentieth Century Fox makes history by transmitting the first motion picture in to deep space, making THE DAY THE EARTH STOOD STILL the world’s first galactic motion picture release. The first deliberate deep space transmission of this highly anticipated science fiction thriller will begin this Friday, December 12, 2008, to coincide with the film’s opening day on Planet Earth. If any civilizations are currently orbiting Alpha Centauri, they will be able to receive and view the film approximately four years from now in the year 2012.

In a time when global movie launches are now commonplace, Fox is raising the bar by spearheading, with Deep Space Communications Network located at Cape Canaveral, the ultimate in “wide release” platforms. As millions of Earthbound movie fans get their first look at THE DAY THE EARTH STOOD STILL, starring Keanu Reeves and Jennifer Connelly, the film will be zipping through space at 186,000 miles per second to a heretofore untapped possible consumer base orbiting the three star system, Alpha Centauri.

Commented Twentieth Century Fox domestic distribution president Bruce Snyder: “We at Fox always like to think big, and what’s bigger than a ‘galactic’ release of a major motion picture event? We look forward to sharing THE DAY THE EARTH STOOD STILL with our galactic neighbors near Alpha Centauri — and look forward to their feedback…eight years from now.”

Prior to its arrival at Alpha Centauri, the transmission of THE DAY THE EARTH STOOD STILL can be intercepted and viewed at various points in our own solar system (Distance from Earth – at the speed of light – and transmission time, as follows):

“We are thrilled about beaming this film into space. This will be our first full length movie transmission. And what could be more relevant to send into Deep Space than a movie about the Earth’s acceptance of visitors from outer space,” commented Jim Lewis, Managing Director, Deep Space Communications Network

Deep Space Communications Network is a private organization located east of Orlando. DSCN was formed specifically to communicate with outerspace by a group of broadcast engineers and communications experts who regularly transmit from the space center.

The beam transmitting THE DAY THE EARTH STOOD STILL is by redundant high-powered klystron amplifiers connected by a traveling waveguide to a five meter parabolic dish antenna.

…
OK, What the hell are these people thinking? The original film was, if I remember correctly, essentially about how humans are not ready to become part of the larger universe and that we are on a path to self destruction. From what I’ve seen of the trailer, it looks like Earthlings are douchebags and the aliens are invited to come and kick our collective asses. Worse than that, our only defense is Jennifer Connelly, T-Bag from Prison Break, and Will Smith’s Kid.

Sending this movie into the stars is like sending out an intergalactic invitation to come and destroy us. We show off our weapons and how easily they are defeated. We even look like we’ve been taken down a few pegs. If aliens do exist, sending them this movie is probably the stupidest thing we could ever do.