In “Silent Hill revelation 3D,” Clemens plays Heather Mason, a young girl who, along with her father, is on the run from a past that she doesn’t fully understand. But on the eve of her 18th birthday, Heather begins suffering from nightmares — nightmares that speak to her horrific connection with a little place called Silent Hill.

Bassett had this to say about Clemens on his blog last week:

“I did camera tests yesterday with her and she looks absolutely awesome. I’m sure you guys are going to just fall in love with her. Tough but vulnerable and capable of delivering a knock-out performance.”

Clemens is one of just two cast members currently announced for the “Silent Hill” sequel, alongside “Game of Thrones” actor Kit Harington.

You can see the first official photo of Clemens as Heather from the upcoming video game adapted sequel below. Yup, falling in love with her already! 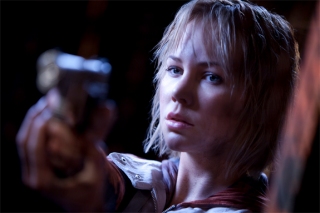