While doing press for Mark Romanek’s “Never Let Me Go,” Andrew Garfield spoke about his preparation for his role as the new Spider-Man. 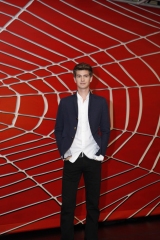 Doing press for Mark Romanek’s “Never Let Me Go” at this weekend’s Telluride Film Festival, Andrew Garfield spoke about his preparation for his role as the new Spider-Man in Marc Webb’s still unnamed “Spider-Man 3D” reboot.

There’s not much Garfield can say as production for the Spider-Man reboot does not begin until later this year, but he did show tremendous enthusiasm for the role when interviewed by THR’s Jay A. Fernandez , saying that it’s been a role he’s preparing for “since Halloween when I was four years old and I wore my first Spider-Man costume.”

Here’s a tasty snipped, you can read the entire transcript over at THR:

Have you been prepping for Spider-Man?

I have been waiting for this phone call for 24 years, for someone to call me up and say, “Hey, we want you to pretend to be a character that you’ve always wanted to be all your life, and we’re going to do it with cool cameras and cool effects and you’re going to feel like you’re swinging through New York City. Do you want to do that?” [laughs] “Let me just consult with my seven-year old self and see what he thinks…” So my seven-year-old self started screaming in my soul and saying, This is what we’ve been waiting for. Like every young boy who feels stronger on the inside than they look on the outside, any skinny boy basically who wishes their muscles matched their sense of injustice, God, it’s just the stuff that dreams are made of, for sure. It’s a true fucking honor to be part of this symbol that I actually think is a very important symbol and it’s meant a great deal to me, and it continues to mean something to people. So yeah, I feel like I’ve been preparing for it for a while. Ever since Halloween when I was four years old and I wore my first Spider-Man costume.

Have you gotten any advice about how to balance it?

I’ve witnessed other friends go through it, so I’m aware of the pitfalls, for sure. So I already feel as prepared as I can be, and also no advice can really prepare you for something so visceral.

Is there any other prep work you’ll need to do? Will you need to change your physicality or do training?

I’m sure there will be a bunch of that, yeah. Flexibility is my main focus right now. Making sure that I can be as flexible as possible. It’s all kind of starting up so I haven’t really got much to say about it.