Are You Ready For A ‘Hook’ Prequel About The Origins Of Rufio?

Dante Basco has been acting and doing voiceover work ever since he appeared in Hook as Rufio. Now he’s got big news about a prequel that tells the tale of the wild-haired Lost Boy.

Dante Basco has been acting and doing voiceover work ever since he appeared in Hook as Rufio. Now he’s got big news about a prequel that tells the tale of the wild-haired Lost Boy. Basco recently sat down with Crave online to talk about his experience as Rufio, what it was like to voice Prince Zuko for the Avatar: The Last Airbender cartoon and the possibility of a new film that will tell the tale of the character that made him famous. 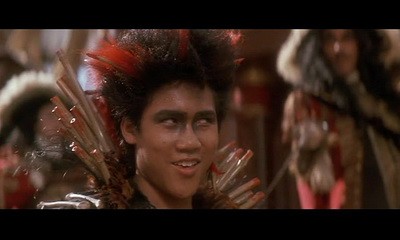 Here are the highlights from the interview. To read the complete interview, follow the link at the bottom of the article.

In the original Avatar: The Last Airbender series, Basco played the role of Prince Zuko. Now, here’s what he has to say about The Legend of Korra and what he’ll be doing with it:

“We just started the new season, I think third or fourth episode. I have a role in it and I’m always proud to be a part of the “Avatar” family. Everything is hush-hush with it always. I’d get yelled at for even talking about it but I’m excited. I love the new show. I think they did a great job and I can’t wait to see how the fans take to it.”

On the possibility of an upcoming Rufio Film:
“Actually there’s a film in development, the Rufio film, where a hotshot group of kids from the East Coast graduated and they wrote this whole script, the prequel to Hook and it’s the Rufio story. We have it right now with a director, Rpin Suwannath who’s doing the new Zorro for Fox. He has the script and he’s attached to the film and I’m attached to produce so that’s actually in development right now which’ll be cool, a Rufio for a whole new generation…

…I’m definitely not in it but I definitely want to find the next young hopefully Filipino actor to play the role, or Asian-American actor to carry on the Rufio tradition…

…The storyline is crazy actually. These guys have a whole storyline of how he gets the Mohawk. The whole story’s crazy. These guys came with the script, I’m like, “You guys wrote this?” Not only did they write this, they did the musical in their college. They were going to go off Broadway with it and then they lost their insurance and they came to Hollywood. If anyone saw their play it’s that, but the newer version is pretty intense. They added more action. I never saw the play but I think they added more backstory to Rufio, like how he became Rufio which I was impressed by. It’s in development .”