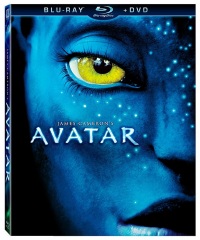 20th Century Fox announced earlier that James Cameron’s billion dollar masterpiece “Avatar” will be released on DVD and Blu-ray April 22, which ironically is the 40th Anniversary of Earth Day. While it make seem “cute” to release a movie about environmentalism on Earth Day, it ultimately fails because the mining, manufacture, production, distribution and waste of the videos probably produces enough carbon to kill a small rain forest and wipe out an entire species.

Anyway, the first edition to be released will be an extremely bare bone non frills version. That means, a special edition with all the bonuses and extras won’t be too far behind. If “Avatar” is a must have so you can show off your armchair environmental pride, then by all means buy this edition while the rest of us wait for the much more awesome special edition that’s forthcoming.

AVATAR on Blu-ray presents the ultimate high definition experience for home viewing audiences. Fans around the world will soon be able to discover every detail and relive every moment of James Cameron’s AVATAR in the comfort of their own home. Blu-ray is recognized for presenting optimal picture and sound, and now AVATAR’s masterful cinematography, art direction and visual effects will lend itself to awe-inspiring clarity when you become absorbed in the extraordinary all-encompassing experience in the living room.

Oscar® and Golden Globe® winning epic is the highest grossing film of all time, taking in over $2.6 billion in worldwide box office. Director James Cameron takes audiences to a spectacular world beyond imagination, where a reluctant hero embarks on a journey of redemption and discovery as he leads a heroic battle to save a civilization. AVATAR delivers a fully immersive cinematic experience of a new kind, where the revolutionary technology invented to make the film disappears into the emotion of the characters and the epic nature of the story.

AVATAR will be available on Blu-ray Disc and DVD everywhere in the United States and Canada on Earth Day, April 22. Please see below for additional release dates around the world: