In a costume that might be one of the biggest departures thus far from the comic book source material, expect some people to be less than kind when they see this.

In a costume that might be one of the biggest departures thus far from the comic book source material, expect some people to be less than kind when they see this. In the comic books, Captain Marvel has gone through some changes in the past few years that have some fans less than thrilled. There’s been less focus on making her sexy and classically feminine, swapping long flowing locks for a short hair, and changing a classically idealized female body for one with attainable breast size and a more muscular frame.

The first photos of Brie Larson as Captain Marvel have hit the internet and you can be sure that a lot of fans are going to complain that the film costume is leaning towards the newer look of the comic book character than the old. Additionally, they’ve changed the color scheme from blue, red, and gold to blue, green, and gold.

Now, before you go and get up in arms, I’ve got some thoughts and theories. First of all, the style (material) of the costume seems to fit the more tactical over spandex aesthetic that the comic books deliver. Also, I’m going to go out on a limb and say that this is probably not the only costume we’ll be seeing her in. If anything, this seems more inline with the Kree color scheme. So, I’d expect to see her start off in this one, but then show up in the present or at least by the end of the film in an outfit that asserts her independence, IE, the traditional comic book colors. 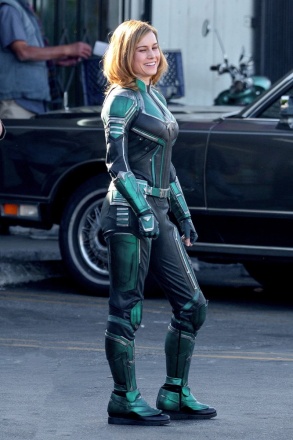