Patton Oswalt To Pen Next Chapter In Serenity With ‘Serenity: Float Out’ One Shot

Float Out includes three brand-new stories of Wash in a series of exciting smuggling raids, each providing daring last-minute rescue or escapes!

Acclaimed writer/actor/comedian/who-thinks-he’s-too-big-for-us-and-declined-our-interview-request-last-year Patton Oswalt (The Goon, Batman, JLA, Ratatouille, Big Fan) is set to pen the next chapter in Serenity by bringing back one of Firefly’s most beloved characters in this special one-shot issue!

In an interview with CBR, Oswalt discusses how his opportunity to pitch “Serenity” came up during filming for “Dollhouse,” another of Joss Whedon’s shows.

“We were talking in between takes, and I was going on about ‘Serenity’ and how much I loved it, and how I was bummed that it didn’t last. And [Joss] was polite enough not to go, ‘Ok, yeah, whatever,’ and actually listen to me,” Oswalt said.

“I had read all the ‘Firefly’ comics, which were great but also very frustrating, because they were expanding on that world, filling in more hints about that world that previously had been hinted even less. So it was that kind of frustration of, ‘Why can’t there at least be more comics?’ At that point, he goes, ‘If you think of anything, go ahead and pitch me’ – which was probably a very polite way of going, ‘How do I get this guy away from me?’ And then I ended up pitching stuff to him.”

“Serenity: Float Out” is set to be released by Dark Horse on June 2. It will retail for $3.50 with two cover variants by artist Frank Stockton and Jo Chen. And if Oswalt is to be trusted, “Serenity: Float Out,””It’s the greatest comic book ever written. After June 2, there’s no new comics on June 9 – they’re letting everyone take a breather. Every publisher is shutting down for the following week.”

Issue synopsis:
Always ready with a brilliant aerial maneuver and a terrible one-liner, Wash was pilot of the Firefly-class ship Serenity in Joss Whedon’s cult-classic TV series before being killed in the movie. Float Out includes three brand-new stories of Wash in a series of exciting smuggling raids, each providing a hair-raising escape or daring last-minute rescue! Featuring a cameo that will leave Serenity fans reeling, this special one-shot presents new tales of the Serenity universe’s past and tantalizing hints about its future! 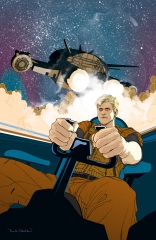 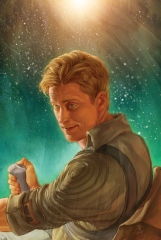