Confirmed: Hugo Weaving To Reprise Role As Elrond In ‘The Hobbit’

Everyone knew there was a small chance that Hugo Weaving would reprise his role as Elrond in Peter Jackson’s “The Hobbit.” Today, it’s finally confirmed.

Everyone knew there was a small chance that Hugo Weaving (Captain American) would reprise his role as Elrond in Peter Jackson’s “The Hobbit.” Today, we finally have confirmation from an unlikely source, namely that of fellow actor Ian McKellan who wrote on his personal blog announcing Weaving’s return.

Check out what McKellan had to say:

The rest of the cast remains on duty for another few weeks, working on hobbit-less sections of the film. These involve dwarves of course but also elves, with Hugo Weaving back for a stretch as Lord Elrond.

Hugo was recently onstage as Astrov in Chekov’s Uncle Vanya for the Sydney Theatre Company, whose director, Cate Blanchett, played Yelena. Before she returns as Galadriel, they will reprise their production at Washington DC’s Kennedy Center in August. I shall miss the revival, because of my own play, Eduardo De Filippo’s The Syndicate at Chichester Festival Theatre and a short UK tour.

Then of course there’s also this new image of Weaving with Jackson posted by Jackson himself from the set of “The Hobbit.” All is right with the world today! 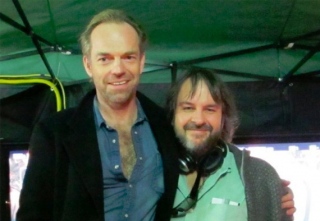