The writer of both Hoodwinked films and the eventual Fraggle Rock film has created the very first “twittersode” based serial.

Cory Edwards, friend of YBMW and the writer of both Hoodwinked movies (Hoodwinked Too out in theaters right now!) and the ever elusive Fraggle Rock movie, is taking the art of story telling to a whole new place… the Twittersphere.

On May 16th, he’ll be launching the adventures of Roger Cosmonkey on his twitter account. in two tweets a day for 10 days he’ll tell the tale of a NASA astronaut chimp who was lost in space and then returns years later, super intelligent, and with enemies on his tail! 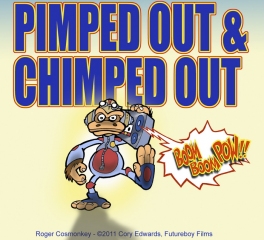 The story will be told in single TWEETS, or “TWITTERSODES,” and each will have a SINGLE
IMAGE attached. It will unfold over ten days, two tweets a day, only on Edwards’ twitter feed.
“I’ve had fun with Twitter,” says Edwards, “I post my goofy comments like everyone else. But I
wondered if a complete story could be told with this new medium — a beginning, a middle and an
end, with cliffhangers and everything. The splashy art and broad premise of “Roger” seemed like
a good vehicle to try it with.”

Edwards explains, “The restrictions of tweeting is what actually made it interesting to me. How
much could you get across in a single tweet? How many tweets would it take to carry an
audience through a story? I see the brevity of this new art form as an intriguing challenge, not a
hindrance.”

THE STORY: In 1968, NASA’s animal program launched a little chimp into orbit. But with a
mission mishap, he became lost in deep space…until now. In 2011, “Roger” is back. Highly
intelligent and pissed off, he and his crew of forgotten NASA animals sue the U.S. government for
millions. But Roger’s made lots of galactic enemies who are still looking for him. When Earth gets
caught in the crossfire, it’s up to Roger to decide if he is a lone chimp or a real hero.

Exclusive to Twitter, found only @RealCoryEdwards. Look for the hashtag #cosmonkey.

The Twitter Adventures of Roger Cosmonkey launches MAY 16th. 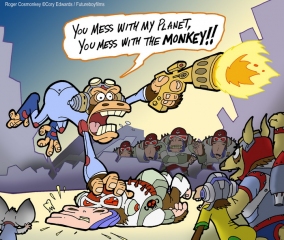 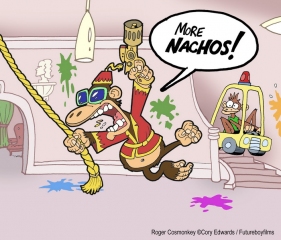 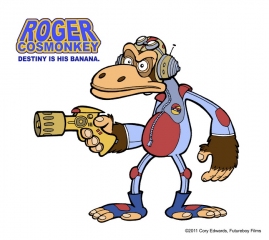