It looks like it could be a contract dispute that finally takes down “Deadliest Catch” the Hisllstrand Brothers. 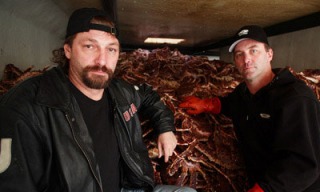 They’ve weathered ice, engine problems, 40 foot seas and the death of a friend, but it looks like it could be a contract dispute that finally takes down ‘Deadliest Catch’s” Hisllstrand Brothers. The Captains of the Time Bandit are locking horns with the executives of the Discovery channel and if they lose, it might just cost them $3 million dollars and their livelihoods.

The dispute erupted over a Deadliest Catch Spin-Off called “Hilstranded.” Despite going through with the filming of the show, The Hillstrand brothers backed out before the voice over work was recorded and the show could be completed.

In response, Discovery Channel is suing John and Andy Hillstrand for $3 million in damages.

Here’s what John and Andy’s Lawyers have to say:

“The recent actions of Discovery Communications are an astonishing and shameful instance of arrogance and greed run amok,” the Hillstrands’ lawyer Jeff Cohen tells us in an extended written statement. “While CEO David Zaslav reaps a $33.9 million bonanza in a single day in January 2010, his company attempts to bankrupt hardworking fishermen. Three million dollars is exponentially greater than any compensation ever paid to the ‘Deadliest Catch’ captains, and yet this is the figure Discovery is trying to extort from these men.”

He went on to say:

Cohen, in his first public comments on the suit, suggests the lawsuit might cause the Hillstrands — among the more popular stars of the Emmy-nominated “Catch” — to give up their profession. “Isn’t there enough unemployment in America without forcing hard-working sea captains to declare bankruptcy, sell their boats and fire their crews?”

Now, I love Deadliest Catch and I really enjoy watching the antics of the Time Bandit, but I’ve got to say, it sounds like this is kind of their fault. I’m guess… just from the name alone… that Hillstranded probably stunk worse than the ship’s bait bins, and the Brothers walked to avoid embarrassment. Unfortunately, they signed a contract. So, if their concern really is about saving the boat and keeping their crews employed, they need to just sack up and do the voice over work.

There’s been no word on what this means for the upcoming season of Deadliest Catch.