Check out the first batch of District seals to be released through a series of Hunger Games Facebook Pages.

It could be regular marketing, or it could be the ramping up of the Viral campaign for ‘The Hunger Games’, but we are starting to get a look at the seals for the individual districts from the movie. Panem, the former USA that is featured in the story is divided up into 12 districts that each produce a specific commodity for the nation. The story focuses on Katniss Everdeen (Jennifer Lawrence) her brother, who must fight to survive in a televised game that helps decide resource allocation.

The seals are popping up in a series of Facebook pages with addresses similar to this: facebook.com/district2pn. To visit the page of each district, just change the number in the URL. 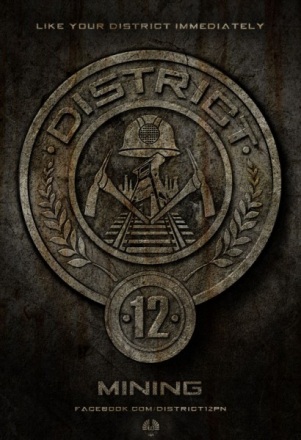 If you want to take part in the Viral campaign for Hunger Games, just go to their viral site: www.TheCapitol.PN. There, you can sign up to become a citizen and create your own District Identity Passes.

Official Synopsis:
Every year in the ruins of what was once North America, the nation of Panem forces each of its twelve districts to send a teenage boy and girl to compete in the Hunger Games. Part twisted entertainment, part government intimidation tactic, the Hunger Games are a nationally televised event in which “Tributes” must fight with one another until one survivor remains.