Does The First ‘Kingsman: The Golden Circle’ Poster Contain a Major Spoiler

There’s plenty of time to figure it out. Kingsman: The Golden Circle doesn’t hit theaters until June 17, 2017.

Usually, spoilers for movies pop out during production or from people who have seen early cuts of the film. It’s pretty rare that what appears to be a major part of ‘Kingsman: The Golden Circle’, the sequel to the comic book adaptation hit from a couple years ago.

As you may remember from the first film, Colin Firth’s character, Galahad, wasn’t lucky enough to make it to the final credits. Now, the first teaser poster for the film is emblazoned with the classic Mark Twain quote: “Reports of my death have been greatly exaggerated.” There’s really only three people whom that quote could apply to from the first film. If not Galahad, then possibly Michael Caine’s Arthur, or possibly (And I really hope it doesn’t turn out to be this) Sam Jackson’s obnoxious antagonist, Valentine. However, given the manner of his death, all clues on the poster definitely point towards Galahad.

There’s plenty of time to figure it out. Kingsman: The Golden Circle doesn’t hit theaters until June 17, 2017. 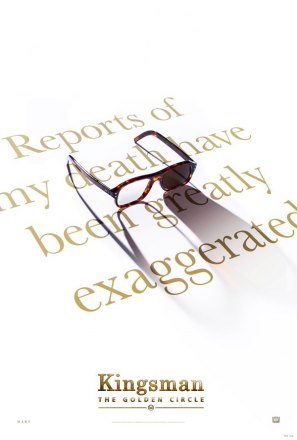