Skrein has set a powerful precedent that may soon become a trend among actors finding themselves on the wrong end of a whitewashing accusation.

Let’s start this off with a defense of Ed Skrein. He is an actor. He was offered a job and he took it. He has no control over who the job is offered to. There is no legitimate reason that he should be the focus of any rage from people calling out his casting as Major Benjamin Daimio (a Japanese American comic book character) in the upcoming Hellboy Reboot. That said, this is the internet…

For his part, Skrein had no interest in making the situation any worse than it was, so he decided it was best to step down. While I think it’s definitely a shame, that he had to lose a job over this, there is a potential upside. For him, he and his fanbase will not be the subject of abuse. And, he’s now set a precedent for someone walking away from a big movie production because of whitewashing.

Here is Liongate’s statement on the departure:
“Ed came to us and felt very strongly about this. We fully support his unselfish decision. It was not our intent to be insensitive to issues of authenticity and ethnicity, and we will look to recast the part with an actor more consistent with the character in the source material.”

Skrein posted his own reply to social media, you can see it below: 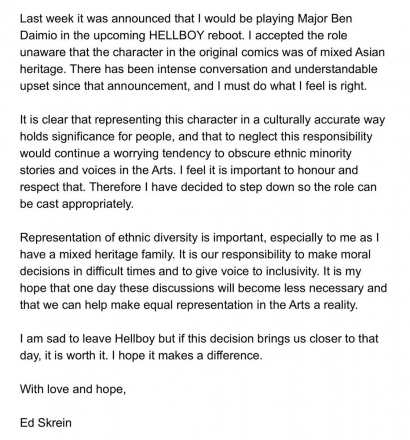