She’s not pregnant. She’s not about to climb inside your dreams. This time, Ellen Page just wants to beat you senseless in the name of justice.

James Gunn’s ‘Super’ has been one of the most anticipated indy movies for geeks since it exploded onto the scene at Comic Con last year. It is finally getting ready for a release… even if it is only on the small screen, this April 1st.

In the last couple of weeks we got to see the trailer and the first poster that featured Rainn Wilson. Now we get a chance to see the second poster, this time featuring Ellen Page. 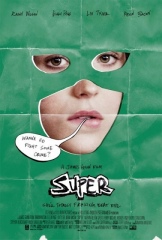 Frank (Rainn Wilson) is an average guy who transforms himself into superhero The Crimson Bolt after his wife Sarah (Liv Tyler) hooks up with a smooth-talking drug dealer, Jacques (Kevin Bacon). What Frank lacks in superpowers, he makes up for with a trusty wrench in his one-man war on crime. But every superhero needs a sidekick. Enter Libby (Ellen Page), a cute psychopath working at the local comic book store. Transforming into “Boltie”, Libby teams up with Frank to take Jacques down. From the surprising imagination of writer-director James Gunn (Slither) comes Bolt and Boltie, a crazed crime fighting duo for the XBox generation. They’re here to save the day, or at least to beat you up.