Unfortunately, she’s not the only one up for the role. Lily Collins and Mia Wasikowska (From Tim Burton’s Sucktastic “Alice in Wonderland”) are also up for it. 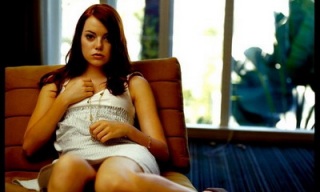 Emma Stone is going places in her career. She’s had great performances in everything from ‘Zombieland’ and ‘The Paperman’ to her new film, ‘Easy A.” Even Roger Ebert says she’s now a star in her own right and not just another passing fad (well, he typed it at least… he’s not much for talking these days).

Now, it seems, Emma is up for what may just be the biggest role of her career. She is up for one of the main roles in the new Spider-Man film. There is no word on which role she is up for, but there’s really only a couple major roles for females: Mary Jane Watson and (probably) Gwen Stacy.

On a quick side note here… there’s a small rumor that Mary Jane might not even be in the new film. If that is true, than I’m guessing it was thought up by the same folks who wanted to put a giant robot spider in a Superman Movie.

Getting back to the topic at hand, Emma Stone would be a great MJ, and not just because she’s hot as hell and already a red head. She’s got the right personality and more acting ability than most people are giving her credit for. The only other role I can think of for her might be Black Cat, but… as much as I’d love to see her in a skin tight leather bodysuit, I’m already sold on her as MJ.

In other news, she’s up for a role in the film version of ’21 Jumpstreet.’ Sure, this version would be an action comedy and she’d get to team back up with Jonah Hill, but really? That thing’s got ‘Land of the Lost’ written all over it.