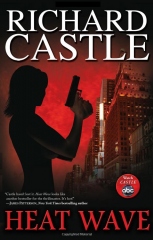 For those who’ve been watching Nathan Fillion’s ABC crime-drama series “Castle,” I’m sure you’re all aware of the novel Richard Castle (Fillion) has been writing in the series based off his reluctant muse NYPD detective Kate Beckett (Stana Katic). While it hasn’t yet to be published in the series, “Heat Wave” has been released as an actual hardcover and is currently available at various bookstores.

A New York real estate tycoon plunges to his death on a Manhattan sidewalk. A trophy wife with a past survives a narrow escape from a brazen attack. Mobsters and moguls with no shortage of reasons to kill trot out their alibis. And then, in the suffocating grip of a record heat wave, comes another shocking murder and a sharp turn in a tense journey into the dirty little secrets of the wealthy. Secrets that prove to be fatal. Secrets that lay hidden in the dark until one NYPD detective shines a light.

Mystery sensation Richard Castle, blockbuster author of the wildly best-selling Derrick Storm novels, introduces his newest character, NYPD Homicide Detective Nikki Heat. Tough, sexy, professional, Nikki Heat carries a passion for justice as she leads one of New York City’s top homicide squads. She’s hit with an unexpected challenge when the commissioner assigns superstar magazine journalist Jameson Rook to ride along with her to research an article on New York’s Finest. PulitzerPrize-winning Rook is as much a handful as he is handsome. His wise-cracking and meddling aren’t her only problems. As she works to unravel the secrets of the murdered real estate tycoon, she must also confront the spark between them. The one called heat.

About the Author:
Richard Castle is the author of numerous bestsellers, including the critically acclaimed Derrick Storm series. His first novel, In a Hail of Bullets, published while he was still in college, received the Nom DePlume Society’s prestigious Tom Straw Award for Mystery Literature. Castle currently lives in Manhattan with his daughter and mother, both of whom infuse his life with humor and inspiration.

Published by Hyperion, the novel is written entirely in character from the dedication to the acknowledgment. An actual author has yet to be revealed. ABC plans on uploading the first half of the novel on their website in weekly installments, but fans will have to still buy the book to read it in its entirely. Namely, all the conclusion but not “sex scene” which begins on page 105, chapter 10.

So congrats to Richard Castle, you are now officially a New York Times bestselling author!

Check out the trailer for “Heat Wave” below: