First Image of “Red Mist” from the movie Kick-Ass

Finally, a movie that features realistic superhero costumes that can be purchased at Kmart for $20. I know what I want to be this Halloween!

Moriarty over at Ain’t It Cool News has written a lengthy report from the set of Kick-Ass. As a bonus he also threw in the first look at the character, Red Mist, played by Christopher Mintz-Plasse.

Kick-Ass which is an adaptation of Mark Miller’s new comic book series is both written and directed by British filmmaker Matthew Vaughn, of Layer Cake and Stardust previously. The movie is set for release sometime in 2009. 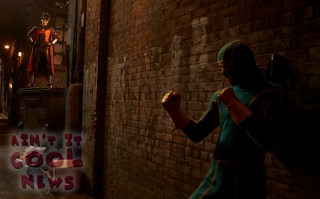