First Images Of Josh Brolin’s As The Gunslinging Jonah Hex

Last time we showed you images of Megan Fox’s character, Leila, on set in the upcoming live-action “Jonah Hex” film. Today, we have images of Josh Brolin as Jonah Hex himself.

I wouldn’t exactly say Brolin is dead-on, balls to the wall accurate as Hex, but it’s a promising start. I mean, Megan Fox is in it so it can’t all be that bad right? … Right? 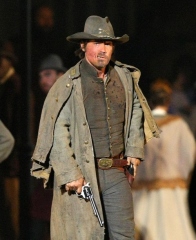