I’ll miss the rubber suits, but I’m curious to see how mo cap works out for the turtles.

Two turtle stories in one day and neither of them have Megan Fox jumping up and down on a trampoline? That’s madness!

Access Hollywood has snagged a pic of three of the Teenage Mutant Ninja Turtle Motion capture suits during filming. They also have what looks like a bad guy in pic as well… we are guessing foot clan as he looks kinda ninja..ish.

This is one of the first times I’ve seen a suit like that that includes parts of the body that aren’t natural (the shell). It will be cool to see if this helps with the mo-cap performance or just ends up looking silly. 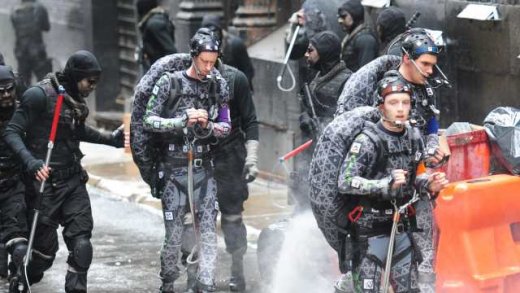