First Look At Concept Art For Henson’s “The Happytime Murders”

I feel like we’ve been reporting on this film for the better part of three years already, so it is great to see something tangible that let’s us know it may still happen.

I feel like we’ve been reporting on this film for the better part of three years already, so it is great to see something tangible that let’s us know it may still happen. We only have a couple images to show you right now, but the murder scene looks pretty awesome. Now, here’s the bad news. Imagine all this puppety awesomeness… and then add Katherine Heigl. I for one look forward to her interviews where she talks about how she didn’t like the puppets and found them untalented and annoying. Not that Heigl has a reputation for bagging on her co-stars or anything…

On the upside, Todd Berger is behind the film… and he seemed to do pretty OK with Kung-Fu Panda. So, him and The Henson crew working together could be pretty epic. 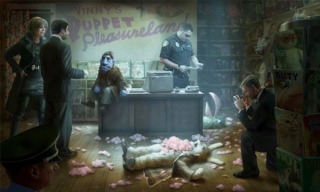 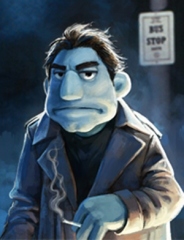 official Synopsis:
In a world where puppets co-exist with humans as second class citizens, puppet private eye and disgraced ex-cop, Phil Phillips, is hot on the trail of the serial killer who murdered his brother and is now targeting the cast members of the famous 80s television show, “The Happytime Gang.” As the killings continue, Phil’s former flame, Jenny, is next on the list. It’s up to Phil and his ex-partner, Detective Edwards, to find the culprit, but as bad blood and old resentments resurface the clues start pointing to the only viable suspect, Phil himself. Now he’s on the run with only his wits and hard headed determination, as he tries to solve, “The Happytime Murders.”