First Look At Hank Azaria As Gargamel From ‘The Smurfs’

Courtesy of Comingsoon.net, here’s your first look at Gargamel from Sony Picture’s upcoming “The Smurfs” live-adaptation played by Hank Azaria.

Azaria will play the evil wizard Gargamel who hunts and chases down little blue Smurfs. The story will predominately take place in New York, where the Smurfs magically get transported into our world and they must find a way to return home before Gargamel catches them.

“The Smurfs” will be in 3D and isn’t expected to be released until August 3, 2011. It will blend CG Smurfs with real actors. 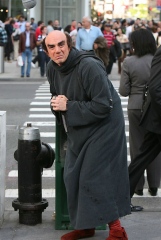 To see more of Gargamel, head on over to the link below.