Between the Tesseract briefcase and amazing DVD sleeves from Matthew Ferguson, this might be the nicest Blu Ray Set ever released.

Marvel is dropping a bunch of info their Marvel Cinematic Universe: Phase One Blu-ray Collection. We’ve got a picture of the packaging… which is this slick looking suit case with a tesseract holder in it. Then we’ve also got pictures of the artwork that will be on each of the Discs.

Matthew Ferguson did the artwork for the discs and I’m really hoping that the pictures also get released as prints. 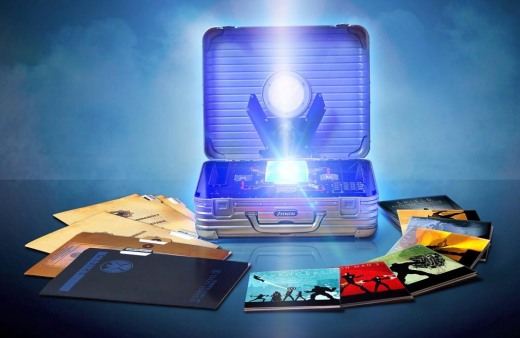 Immerse yourself in every aspect of Marvel’s elite Super Heroes with this limited-edition, 10-disc Marvel Cinematic Universe: Phase One Collection. Complete with glowing Tesseract, this exclusive replica of Nick Fury’s iconic briefcase includes stunning Blu-ray 3D™ and Blu-ray™ presentations of The Avengers; Captain America: The First Avenger and Thor, as well as Blu-ray™ versions of Iron Man; Iron Man 2 and The Incredible Hulk in exclusive collectible packaging. Plus, now that you possess the highest level of security clearance, you have been granted access to S.H.I.E.L.D.’s most confidential files, including a top-secret bonus disc filled never before seen, classified information. Also featuring exquisitely detailed art, prop reproductions and artifacts from the motion pictures, the must-own Marvel Cinematic Universe: Phase One Collection will verify your status as the world’s greatest authority on the Marvel Super Hero mythos!

“Created exclusively for this collection, artist Matthew Ferguson distills each film to its most iconic elements in six brand-new pieces of art that will adorn the sleeves holding the Blu-ray discs themselves.”