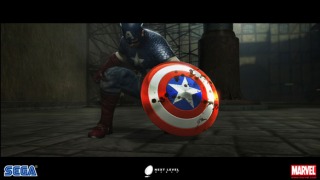 SEGA just announced today the development of “Captain America: Super Soldier,” a new video game that will let players assume the role of Marvel’s first Avenger and fight Nazis in World War II. Below we have some first look at the game along with some production images

“Captain America: Super Soldier” is a continuation of Marvel-based released from SEGA, who also developed “Iron Man,” “Iron Man 2,” and the upcoming “Thor.” For fans worrying about the quality of the games (because let’s face it, the Iron Men games sucked), never fear, SEGA has a new team working on these new Marvel games. And if this turns out to be anything similar to “Thor,” it’ll be nothing short of amazing!

“Captain America” is set entirely in World War II. Gamers will play as Steve Rogers in a free-flowing combat and strategy plaformer that’ll have Rogers infiltrating Hydra’s mysterious castle and doing battle with Nazi scums like the Iron Cross, Hydra and the Red Skull himself!

The game is said to share continuity with the film, both set for release in 2011.