Here’s you first official look at Anne Hathaway as Selina Kyle in her Catwoman suit in Christopher Nolan’s “The Dark Knight Rises.”

Here’s you first official look at Anne Hathaway as Selina Kyle in her Catwoman suit in the Christopher Nolan directed “The Dark Knight Rises.” From the looks of it, it doesn’t appear that it’s the full costume and it is also very different than the earlier leaked description of how Nolan’s Catwoman would appear:

Anne’s outfit is more tactical, like the comic book, than the previous Batman movies. She will definitely be wearing the goggles and it’s going to be less sexy than Halle Berry and Michelle Pfeiffer’s Catwoman costumes. She’s going to look more like a robber….But fan boys shouldn’t be worried. This costume is going to be form-fitting enough to make Anne look smoking hot….Everything from the looks in her eyes, her head movements, her body–everything is so feline. The role is taking her to new places

Perhaps the one glaring omission is the feline feel to her suit. Without it, she could possibly even be confused as the Black Widow from “Iron Man 2.” Although Hathaway wouldn’t be my first choice and this first look is extremely disappointing, I still have faith in Nolan and his vision. 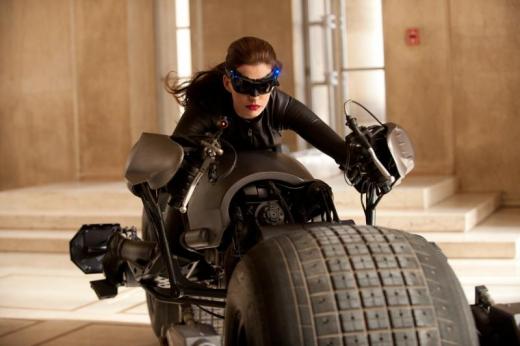