Here’s your first official look at Edgar Wright’s upcoming live-action adaptation of Bryan Lee O’Malley’s graphic novel series, “Scott Pilgrim Vs The World.” Like all the other candid cast photos that have been released, this one is just as annoying with its obscure angle at which the image was taken.

However, thanks to Slashfilms and their elite Photoshop ninja skills, we get a reconstructed look at how the cast and characters will look in the film. 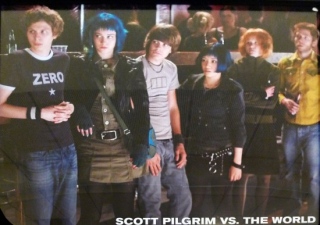