Entertainment Weekly has the first official pics of Chris Evans as Captain America… without the mask. I have to say, he looks pretty Captain Americaish…

In the article, along with the photos, they take some time to talk to Evans about the gig and what it was like signing on to a six picture deal that could have drastic ramifications on the direction of his career.

“I was just scared. I realized my whole decision making process was fear based, and you never want to make a decision out of fear.’” 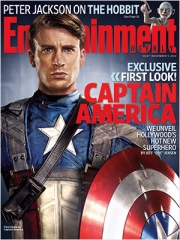