Bryan Singer Tackles Jack and The Beanstalk. Check out the first poster and trailer after the jump!

Lately, the only thing we’ve been able to say about Bryan Singer is that he’s doing horrible, terrible, no good, very bad things to the reboot of ‘The Munsters’ over on NBC. Now, we are finally getting a chance to look at the other project that he’s been talking about for a couple years.

‘Jack Giant Killer’ is essentially the tale of Jack and the Beanstalk. In the role of Jack is Nicholas Hoult, who was excellent in the British version of the show ‘Skins’, not to be confused with whatever the hell that thing MTV vomited onto TV was.

Along side him are Ewan McGregor, Eleanor Thomas, Stanley Tucci, Ian McShane, and Bill Nighy. 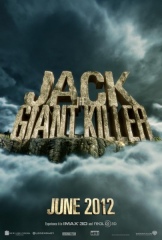 Official Synopsis:
Jack the Giant Killer tells the story of an ancient war that is reignited when a young farmhand unwittingly opens a gateway between our world and a fearsome race of giants. Unleashed on the Earth for the first time in centuries, the giants strive to reclaim the land they once lost, forcing the young man, Jack, into the battle of his life to stop them. Fighting for a kingdom, its people, and the love of a brave princess, he comes face to face with the unstoppable warriors he thought only existed in legend—and gets the chance to become a legend himself.